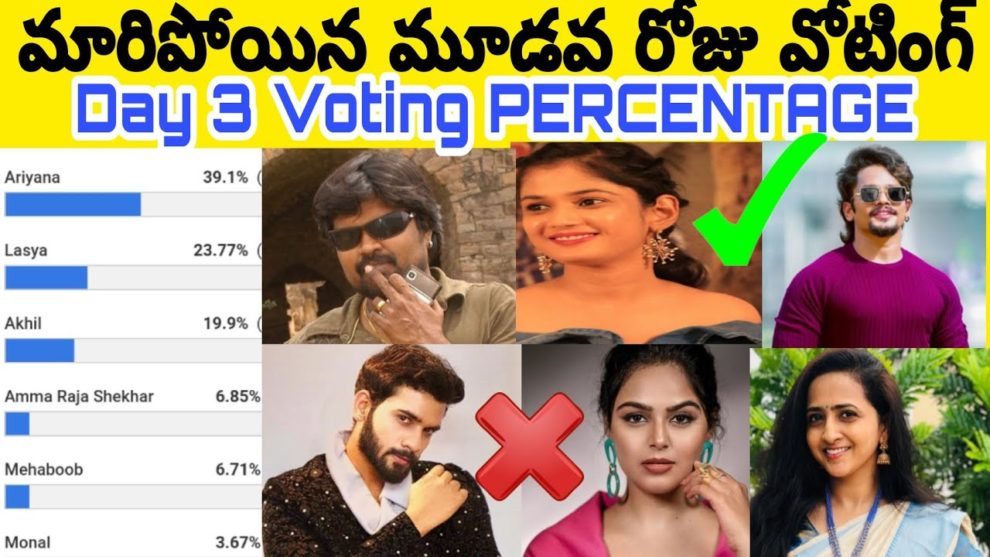 Bigg Boss Season 4 is about to complete its eighth week. A total of 19 contestants, including wild card entries, competed for the Bigg Boss title. By the 54th episode, there were only 11 left in the house.

In fact there is no one who can claim to be the strongest contestant this season compared to previous seasons. Noel, Lasya, Abhijit, Akhil, Monal, Mehboob, Sohail, Ariana, Amma Rajasekhar, Avinash are in the house but the title winning qualities do not appear.

Is the actual elimination process being done according to the voting by eliminating the contestants who play well over the game one by one from the Bigg Boss House? There are suspicions that.

Previously it was known in advance who would be eliminated by conducting polls on how the audience felt about the elimination. But when it comes to this season the poll result is one thing and Bigg Boss is another to be eliminated from the house.

But this season Bigg Boss seems to be saving some selected contestants .. focusing on only five .. saving from nominations. Bigg Boss cats are indescribable, especially for saving guys like Monal Gajjar and Mehboob.

However, by the eighth week, Amma Rajasekhar, Ariana, Mehboob, Lasya, Akhil and Monal have been nominated in the nomination process and it is interesting to see who will be eliminated.

Double Elimination this weekend?
The strong argument with netizens is that Bigg Boss has been protecting Mehboob from the very beginning as Bigg Boss is protecting his adopted daughter Monal. Most of the criticism came when Devi was eliminated and Mehboob was saved. Even after that, when Mehboob got into the nomination, Sohail, who was the captain of the house, was given special power and saved from going into the actual nomination.

However, by the end of the week, Mehboob was nominated along with Amma Rajasekhar. Of the six nominees presently Amma Rajasekhar, Ariana, Mehboob, Lasya, Monal and Akhil, it is already clear that Bigg Boss will not let his adopted daughter Monal slip anyway.

And since Akhil and Monal have been nominated as a couple .. I don’t know what they think is a great sin if this couple is separated but .. both of them are in the safe zone even in the nominations.

And if Lasya puts her game aside .. otherwise she will take a break from gossip in Bigg Boss House .. Lasya may also be safe as it is hard to imagine a Bigg Boss house without gossip. On top of that she also has a good fan base so the chances of being saved are high. Ariana Glory is playing like a female tiger no matter what task she is given. If only one minus, ‘Ati’ Yana Glory, is missed, Ariana will not be able to turn around if that extreme is reduced. Truth be told, Ariana Glory Strong is one of the girls in the house. So even Ariana seems to have been saved in this week’s nomination.

There are only two left .. One is Amma Rajasekhar .. The other is Mehboob. Both of these seem to be in the danger zone. Amma Rajasekhar initially entertained well but later turned into a selfie. Word for word here .. word for word here and there .. turned sour with the stinging. With this, we can’t bear the anarchy of Amma Rajasekhar, baboy .. Many people are saying that he should be eliminated. Opposition is being expressed in the case of Mehboob himself. Performance in physical tasks iragadistunna .. In some cases, the same is being minus him. Mehboob, who escaped the nomination by saving Ariana Glory in the nominations discussions on Sunday, was nominated again in the eighth week.